I traveled on Trenino Verde (The little Green Train) from Arbatax to Mandas back in July 2010. Forget all the mod cons. It took more than five hours, the train overheated and the driver considered calling a rescue party. However, it is an adventure to be had, with some spectacular views!

Please click on the images to see them larger. 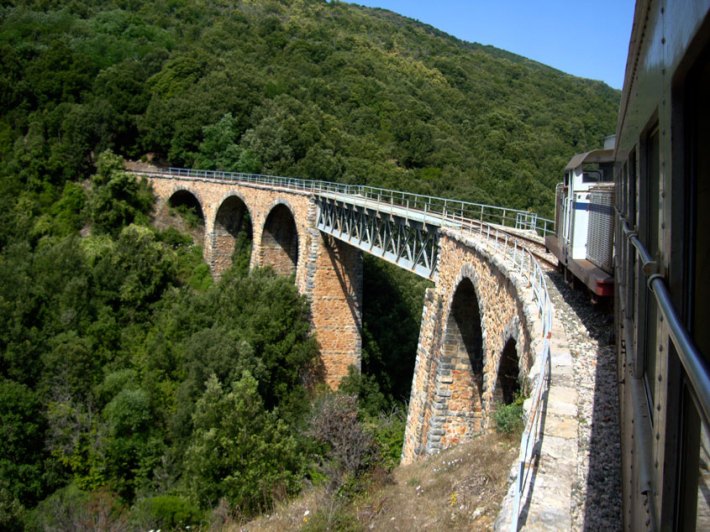 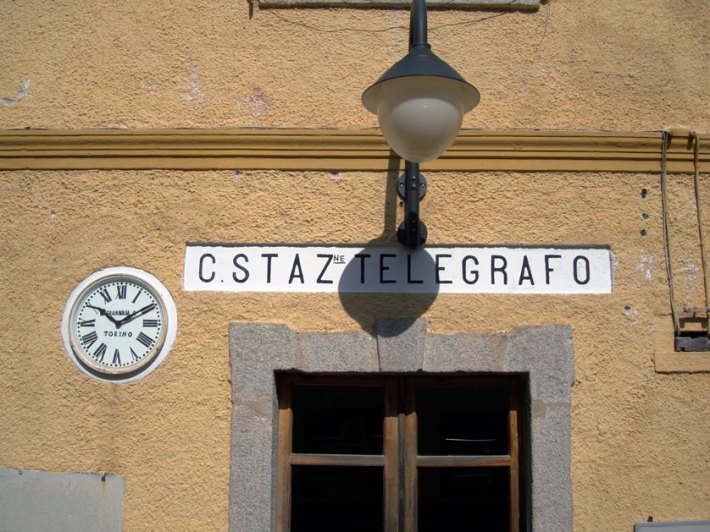 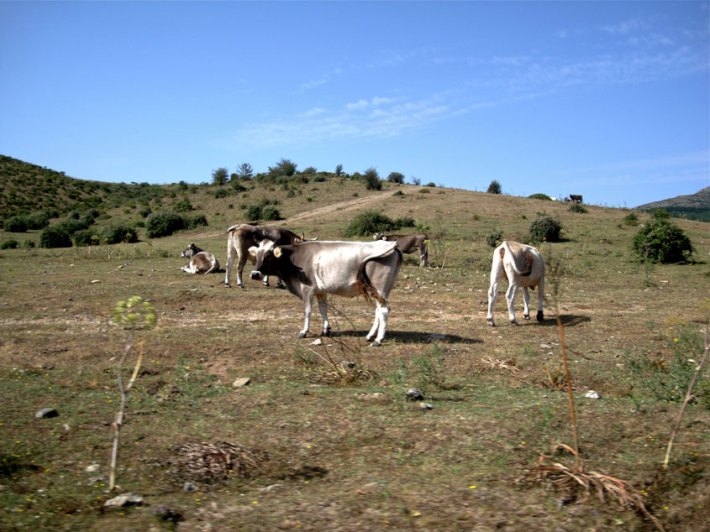 Rattle and roll into old Sardinia

It used to carry farmers to market and drove DH Lawrence to despair. These days, the island’s ancient Trenino Verde takes tourists to a remote world little changed in over 100 years

The problem with DH Lawrence’s trip to Sardinia was that he went too soon. A train journey he made into the mountainous interior in the winter of 1921 was amusing at first, but after sunset it became cold and dark and there was nothing to see. The village at the terminus was boring, the food and lodging mediocre, and next morning he took the first train out. After nine days he sailed away in high dudgeon, which he proceeded to vent in a vividly irritable travel book, Sea and Sardinia.

In the aftermath of the first world war the island was hardly geared for tourism. It is now, but far from the glitzy resorts on the Costa Smeralda a narrow-gauge railway meanders into the heart of a landscape that has changed little since Lawrence’s whistle-stop tour.

The Trenino Verde, the “little green train” that runs for 100 miles from the east coast to his overnight stop at Mandas, is a roller-coaster ride through a convoluted jumble of mountains and meadows that must rank as one of the world’s great small railways. The name was coined by the World Wildlife Foundation because it travels through some of the greenest, most sparsely populated parts of the island. Beyond it lies a little known treasure – a nature reserve where the last wild horses of Europe roam free with boars and wildcats on a high basaltic plateau.

Lawrence took the direct railway from Cagliari to Mandas, but the more circuitous Trenino Verde begins its laborious ascent from a pink railway station by a little harbour filled with fishing boats in the port of Arbatax.

Above the village is a modern rustic hotel, the Relais Monteturri, with a dining terrace overlooking the kind of bay that Neapolitans sing about, a place to savour fine food and wine by moonlight, and watch boats sailing home across the dark, glistening sea.

In the early morning, a thin stream of mist was hovering over the bay as passengers queued at the station to buy tickets for the Trenino Verde’s first run of the season. This took some time, not because there were many of us, but because the tickets were written neatly by hand by a bespectacled clerk.

When the tracks were laid in 1888, most of the travellers were farmers, shepherds and shopkeepers. Now their descendants have roads and cars, and the Arbatax-Mandas line is maintained as a tourist attraction.

The trains used to be pulled by steam locomotives, but they had an unfortunate habit of setting fire to the countryside, so now diesel engines do the hard work – but they still have great whistles. Smartly on time at 07.50, the station master blew a whistle, the engine driver replied with a shrill toot-toot, and with a shake, rattle and roll we were off.

Speeding away, we were treated to a succession of long, happy whistles. After the long winter lay-off, our little train was like a horse bolting from a stable to run free. Dogs barked and passers-by smiled as we rattled over level crossings, red and white barriers holding back queues of traffic for our cheerful passage.

We were trucking along at a fair old speed, easily more than 20mph, and soon we were winding among foothills of dry, scrubby land framed by craggy peaks, sun-washed ochre against an azure sky. Then a long, sinuous climb into the mountains began, the trenino’s exuberance faded, and our engine toiled. This gave us time to admire vineyards dotted with bright red poppies, and vistas of green valleys running down to the sea shimmering in the distance, eternally confining and defining Sardinia as a land apart.

After an hour we chugged into the town of Lanusei, where a sign informed us that we were precisely 555.4m above sea level. There was a leisurely interval while engine and passengers were refuelled with diesel and cappuccinos, before we resumed our journey into the heart of old Sardinia.

Emerging from a forest we ran among crags, gazing down on plunging ravines and rock faces etched with switchback paths and villages perched improbably on precipitous mountainsides. It was reminiscent of the Old West, as we snaked between bluffs of sand-coloured rock in the high sierra, our iron horse chugging bravely into the Badlands – and so it used to be. To the north lies the Barbagia, the stronghold of rebellious peasants and time-honoured banditry recorded by the Roman geographer Strabo in the 1st century BC.

In the old days, Sardinians liked to define bandits as shepherds who had lost their flocks. In less charitable moods, they described shepherds as bandits with sheep. In recent years, the kidnap and ransom business has gone out of fashion, and now shepherds concentrate on producing ewes’ milk for the coveted tangy pecorino cheese. “Real bandits rob banks now,” a local told me. “Kidnapping people has become too complicated.”

With another train due along in the afternoon, some passengers broke the journey by getting off at a place called Seui. A sign by the platform listed local attractions as an historic centre, an old watermill, a grotto and an ethnographic museum. It seemed a lot for a small town in the middle of nowhere.

We trundled on, and on the other side of a tunnel we came out on the roof of Sardinia, a plateau of forests with a shallow river running through it where well-fed cattle regarded us with polite interest. Then we dropped disconcertingly into an illusion of alpine scenery, with hay meadows ripening around a tranquil lake. From John Wayne territory to The Sound of Music in half an hour.

The terminus at Mandas appeared suddenly around a bend, and we squealed to a halt after a journey of five hours that seemed like five minutes.

When Lawrence was here with his wife Frieda, she asked a railway worker if there was anything to see in Mandas. “Hens,” he replied. “At Mandas, one does nothing. At Mandas, one goes to bed when it’s dark, like a chicken. At Mandas, one walks down the road like a pig that is going nowhere.”

Not much seems to have changed. On a hot afternoon in Mandas even the pigs and chickens were comatose. However, with commendable spirit, civic officials have created an annual international DH Lawrence Prize for travel writing, with the first award ceremony due to take place during a two-day literary event in the village in September.

The big tourist attraction here lies a few miles away at Barumini, in the form of a massive bronze-age stone edifice. This Stonehenge of Sardinia baffles archaeologists, who cannot decide whether it was a castle, a temple or a mausoleum. Personally, I don’t care. Old piles of rubble leave me cold, and nearby there is a far more wonderful place.

Rising more than 1,300ft from a broad plain is a volcanic plateau called the Giara di Gesturi, a nature reserve of ancient cork forests and an exuberance of shrubs where even the rocks sprout carpets of red moss and delicate white flowers. This botanical garden in the sky is a haven for wildlife, far above the din of humanity, complete with rich pastures and rainwater ponds. It is also home to the cavallini della Giara, Europe’s last wild horses, believed to be descended from animals introduced by Phoenicians around 1,000 BC.

About 500 of them roam in a world of their own barely 10 minutes’ drive from the picturesque village of Tuili, but my guide Roberto said we would be lucky to spot any. We were lucky.

Emerging from a belt of trees, we saw a stallion and three bay mares grazing by the largest of the freshwater ponds. As we approached quietly, a shrill whinnying from the forest brought us to a halt. Seconds later, two jet-black colts broke from cover and raced around the other horses, manes and tails flying in a joyful display of grace, power and freedom. Then they were gone, cantering into the woods, leaving us dazed and happy.

Artist and curator, founder of Šilainiai Project.
View all posts by Evelina →